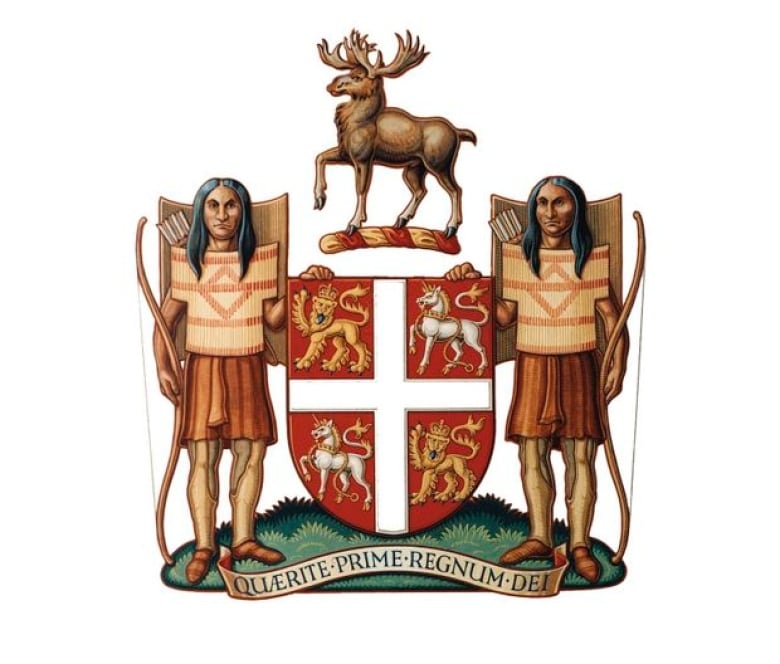 The Newfoundland and Labrador government has decided to change the official description of the province’s 400-year-old coat of arms, which includes a reference to Indigenous people as “savages.”

Premier Andrew Furey said a formal notice was submitted to the legislature on Thursday following a discussion earlier in the week with Indigenous leaders.

The Liberal premier said his weekly discussion with Indigenous leaders initially focused on the terrible news from Kamloops, B.C., where last week an Indigenous band reported preliminary results of a ground-penetrating radar survey, which indicated the presence of the remains of 215 children at the site of a former residential school.

“The Indigenous leaders are going to reflect on what it means in their communities, and where we want to go in terms of investigating residential schools,” Furey said Thursday, referring to the fact that the province once supported five church-run residential schools — four in Labrador and one at the northern tip of the island.

Furey said the discussion then turned to the province’s coat of arms.

“The description of the coat of arms in our legislation still refers to savages,” Furey said. “We don’t think that is at all appropriate. We gave notice today in the house to change that.”

The premier said the next step is public consultations. “We’ll see where the conversations go,” he said.

In June 2018, the governing Liberals said they would drop the archaic description and redesign the coat of arms after Indigenous leaders and the party’s own Indigenous Peoples Commission called for changes.

For me, taking the name ‘savage’ out of there has to [be] done. That’s an unfair statement to make.– Qalipu First Nation Chief Brendan Mitchell

The coat of arms features two Indigenous figures in traditional garb, standing on either side of a red shield. In the official description, the Beothuk warriors are described as “savages.”

Qalipu First Nation Chief Brendan Mitchell said everyone who attended the virtual meeting on Wednesday agreed that the insulting term had to be dropped.

“They’re all in favour of changing the description,” the Mi’kmaw leader said in an interview Friday from Corner Brook. “For me, taking the name ‘savage’ out of there has to [be] done. That’s an unfair statement to make…. We didn’t get into a lengthy discussion on the actual text.”

The meeting included representatives from other Mi’kmaw communities, the Innu Nation and Labrador’s Inuit.

Original coat of arms granted by royal warrant in 1637

When the issue first surfaced in 2018, Labrador politician Randy Edmunds said the Beothuk must be represented on the coat of arms to honour an Indigenous group that was wiped out after European settlers encroached on their land, resulting in deadly conflicts and the introduction of new diseases.

Edmunds, an Inuk who was defeated in the 2019 provincial election, said other Indigenous groups should also be recognized.

The original coat of arms was granted by royal warrant from King Charles I of England in 1637. At the time, the island of Newfoundland was known as Terra Nova, and it wasn’t yet joined with Labrador.

The heraldic symbol was actually given to a business syndicate known as the Company of Adventurers to Newfoundland, which seemed to have little knowledge of the area.

Aside from the coarse description of the Beothuk, the coat of arms includes a depiction of a prancing elk, hovering between the two warriors. The animals are not native to Newfoundland and Labrador.

‘She reminded me of my mother,’ U.S. president says after meeting Queen