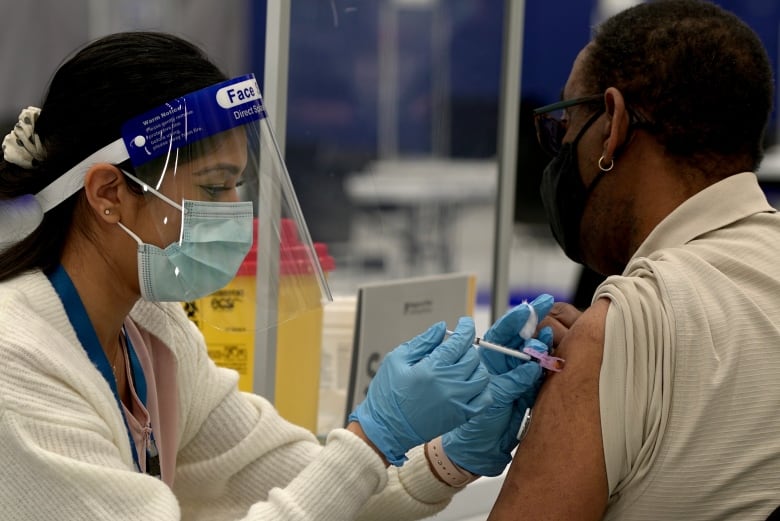 Dr. David Williams, Ontario’s chief medical officer of health, is scheduled to hold an update on the COVID-19 situation in the province at 3 p.m. ET. You can watch it live in this story.

Ontario will move into the initial phases of its reopening plan three days ahead of schedule, the government said Monday, including loosening restrictions on retail and outdoor activities.

The province said that the decision was made based on vaccination rates and “continuing improvements in key public health indicators.”

The province was initially supposed to begin Phase 1 of the plan, called the Roadmap to Reopen, on June 14. Instead it will take effect at 12:01 a.m. ET Friday.

Phase 1 allows for changes like larger outdoor gatherings, patio dining with up to four people and non-essential retail to open at 15 per cent capacity. Outdoor religious services, group exercise and day camps for children can also begin again, with limitations and health measures in place.

As of Sunday, more than 10 million doses of COVID-19 vaccines had been administered in Ontario. About 61.2 per cent of the total population, or 72 per cent of those aged 18 and older, have now had at least one shot.

The government and Chief Medical Officer of Health David Williams had set a threshold of at least 60 per cent of adults with a first shot before moving ahead with the start of reopening.

The province reported 525 new cases of COVID-19 this morning, the fewest since late September 2020.

Labs completed just 15,117 tests and Public Health Ontario logged a positivity rate of 3.6 per cent, but today’s case count is well below last Monday, when 916 infections were confirmed with just over 18,000 tests done.

There are about 7,937 active infections provincewide, down from the third-wave peak of nearly 43,000.

As of Sunday, there were 497 people with COVID-related illnesses being treated in intensive care units, including 31 patients who were transferred from Manitoba. It marks the first time that figure has fallen below 500 since early April. Of those in ICUs, 339 patients needed a ventilator to breathe.

According to data from Critical Care Services Ontario, the average number of new daily admissions to ICUs continues to fall.

The Ministry of Health recorded the deaths of 15 more people with the illness, pushing the official toll to 8,869.

Meanwhile, public health units collectively administered another 116,829 doses of COVID-19 vaccines yesterday, the most ever on a Sunday.

More Ontarians are also eligible to book their second dose of a vaccine through the provincial system today.

Those aged 70 and older, as well as people who received their first dose of an mRNA vaccine on or before April 18, can now book their second shot on the province’s website or through its phone line.

Keystone XL is dead, and Albertans are on the hook for $1.3B